Gift box: Each Item with a Gift Box;

The Ancient and Accepted Scottish Rite of Freemasonry (the Northern Masonic Jurisdiction in the United States often omits the and, while the English Constitution in the United Kingdom omits the Scottish), commonly known as simply the Scottish Rite (or, in England and Australia, as the Rose Croixalthough this is only one of its degrees), is one of several Rites of Freemasonry. A Rite is a progressive series of degrees conferred by various Masonic organizations or bodies, each of which operates under the control of its own central authority. In the Scottish Rite the central authority is called a Supreme Council.

The Scottish Rite is one of the appendant bodies of Freemasonry that a Master Mason may join for further exposure to the principles of Freemasonry.[2][3] It is also concordant, in that some of its degrees relate to the degrees of Symbolic (Craft) Freemasonry. In England and some other countries, while the Scottish Rite is not accorded official recognition by the Grand Lodge, only a recognized Freemason may join and there is no prohibition against his doing so. The Scottish Rite builds upon the ethical teachings and philosophy offered in the Craft (or Blue) Lodge, through dramatic presentation of the individual degrees. 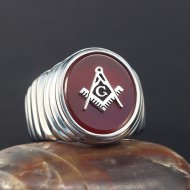